Wade continues his winning streak at the Motul Roof of Africa

Wade continues his winning streak at the Motul Roof of Africa

Wade Young (Sherco Factory Racing powered by Motul) made it 4 in a row and his sixth Roof win overall, by winning the 53rd edition of the Motul Roof of Africa in a wet and windy Lesotho on Saturday. Young was followed home by the Gas Gas duo of Travis Teasedale (Trax TT Racing) who ended up just over 28mins behind the leader with Matthew Green (TT Racing) a further 44mins behind Teasdale. 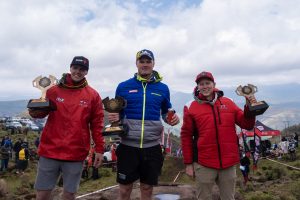 The day didn’t go completely to plan for Young as a navigational issue saw him forced to return to the DSP and re-run a section of the route that had been missed. Following the treacherous conditions experienced by competitors on Race Day 1, organisers, Live Lesotho, made a change to the format for the final day to avoid riders being caught out in torrential rain once again, whilst still preserving the true spirit of the Roof.

“I’m really happy to win my 6th Roof, it was a proper test with the changing weather conditions and a wet Roof is always going to test the mind and body, I’m just relieved it’s over and now it’s time to celebrate a long year!” said Young.

Matt Green was also happy to see the finish line and was overcome with emotion, “It was a really long weekend, the guys did a great job again this year and I’m very happy to be on the podium. ”

Fourth and fifth places in the Gold Class, respectively, were taken by William Slater (TBR Suspension) and Blake Gutzeit (Brother Leadertread KTM). All the riders agreed that the weather conditions and a tough route, made this one of the most challenging Roof’s that any of them could remember.

“On behalf of Live Lesotho, I’d like to extend my congratulations to all competitors who came and conquered this year’s event,” commented Race Director Charan Moore. “I also want to thank all of our team members who worked really hard in extreme conditions to deliver this year’s Motul Roof of Africa and ensure that it was a worthy successor to the iconic events of the past,” he added.

“I think this year’s event was a very good reflection of what the Motul Roof of Africa is all about,” said Mercia Jansen, Motul Area Manager for Southern and Eastern Africa and the Indian Ocean. “The performances of all of the riders that finished shows how the human spirit can triumph over adversity, and that’s something we’ll always celebrate at Motul,” she added.

Young’s triumph was the big news of the day, of course, but other remarkable achievements were unfolding in his wake.

The Silver class saw only 9 finishers from 89 starters and it also happened to have the closest podium finish of the event. Sage McGregor took a well-deserved victory over Jason Stay by less than 7 minutes and despite setting the fastest time of the day, Whitey Oosthuisen (One Nine Auto) came in third overall, less than 2 minutes behind Stay. 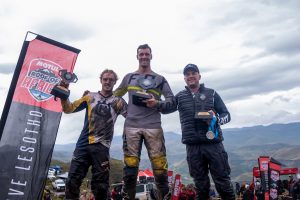 Meanwhile, in the Bronze Class, Rory Gower led the class from start to finish to take first overall, followed by father and son duo Pieter Holl (Bert Smith All Stars) and Jukka Holl in Third. The Bronze class fared the best in the race against attrition with 131 finishers from 199 starters. 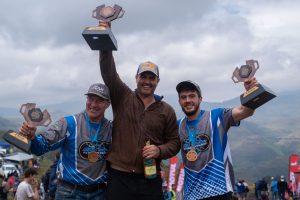 Follow all the latest action and find awesome Roof images and video on the Motul Roof of Africa Facebook page throughout the race. 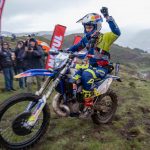 Wade Young crosses the finish and takes the overall win for the 2021 Motul Roof of Africa, by Kevin Sanders 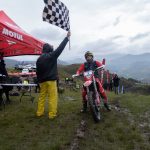 Travis gets to the finish line at the end of the Motul Roof of Africa, by Kevin Sanders 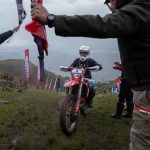 Matt Green crosses the finish line at this year Motul Roof of Africa, by Kevin Sanders